From Mr Ray Chater, an RE teacher just before the High School became part of Brinkburn Comprehensive has contacted us with fond memories of the school. He sent this message and  promises to find the photos:

‘Had a happy year – the school’s last – teaching RS.  I remember with pleasure many of my pupils – especially those in 2B (Miss Brass’ class) and was sorry to be sent off to Brierton instead of being with you and former pupils at Elwick Rd where I had begun my career.  We left Hartlepool two years after for York. Somewhere I have a number of photos of a trip to Hadrian’s Wall and a sports day which I will look for when I have a bit of energy!’

Alix Scott (nee Dixon)  wrote to the Hartlepool Mail in April 2005 with her memories. Alix attended The High School from 1961-68  and became a teacher herself. The second is from Beryl Dunning who was at the school from 1931-8 and wrote to The Mail in May 2005 having seen Alix’s letter. Click on images to enlarge them. 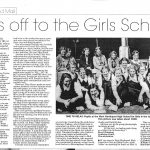 I guess I would be one of your oldest old girls having started at the school in 1948 !  Miss Bell otherwise known as Ding Dong was headmistress and I recall arriving on the first day to find lists of names pinned to the doors of classrooms around the hall and we had to look to see whether we were in the A or B class which decided whether we would be taking Latin or not.

Looking at the photo of the hall it did seem rather small but nevertheless that was where we had great fun performing skipping routines to music played on the piano. The hall was our ‘gym’ too.

Gym slips were the uniform for winter, blue and white dresses in summer and to our eternal shame games were played sporting navy knickers; how times have changed. We played hockey and athletics on the field and if memory serves there were two tennis courts which doubled for netball.

There was a thriving choir if a rather serious one. Benjamin Britten’s Ceremony of Carols and the Stabat Mater were two things we performed under the direction of Miss Cormack.

The French mistress my class had was a Miss Atack – not altogether sure how her name was spelt, who had been with the school many years and the Latin mistress  a Miss K.B Robinson who was rather to be feared in class but great fun elsewhere.

The highlight of 1951 was traveling overnight to London on the train to visit the Festival of Britain.

I don’t think I have any school photos apart from one of my final year group at Elwick Road Junior school.

How lovely to turn back the clock with you.  It really doesn’t seem so very long ago !

I had my Latin O level on Monday 3rd July 1961 (I still have my O level exam papers), but I think I must had been off on the previous Friday because of having no exam that day.

To my horror I realised I’d left my Latin books at school. I was totally panic stricken and it didn’t occur to me to see if the school caretaker would let me in. So I waited til midnight then crept round to the back of the gym, and somehow I managed to open the fire escape door, and go to the classroom to get the books and get back out closing the door behind me. My swotting paid off cos I got 70% for the exam.

Ring of Words 1970  CLICK BLUE LINK to the left. This 1970 issue includes photographs of the school production of Dido and Aeneas

Here are a few girls’ school memories from within the pages of Ring of Words from the late 1950s/early 1960s….. 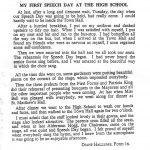 Written in 1961 by 1st year Diane Hallums. It is likely that in the forthcoming years that speech days were tedious marathons to be endured rather than enjoyed !

In 1957, a new wing was added to the 1912 building and this housed the gym, a stage, a library and geography room upstairs and below these the staff room, headteacher’s room and offices.

In 1961, a further wing was added and in this were form rooms for second and fourth years, 6th form rooms on the ground floor and a large art room was built at right angles to this. These alterations are also remembered in ‘Ring of Words’. 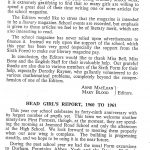