The Early Days before Eldon Grove

In 1893, a site in Lauder Street next to the Town Hall was purchased for a Technical College, and the foundation stone was laid in 1895. In September 1902, the West Hartlepool Secondary Day School with 120 pupils of both sexes was opened in this college (along with an art college and night school) . By Christmas there were 150 pupils and this steadily increased until, by 1906, there were 220 on roll.

West Hartlepool Education Committee then decided to prepare plans to expand the school and these were sent to the Board of Education. The Board however decided that a separate school should be built for girls and that the boys should remain in the Technical College. It was recommended by them in 1906 that the Town Council should build a girls’ school with accommodation for 300 pupils. Eventually in 1910, after further recommendations from the Board of Education, a site of one and a quarter acres was purchased in Eldon Grove.The foundation stone was laid on July 5th 1911 by Mr Stephen W. Furness M.P. for The Hartlepools.

The school was opened on the 8th October 1912 by Mrs Walter Runciman (wife of the former Board of Education president and M.P.) who in her opening speech remarked that the time had passed when brains were considered to be unnecessary in girls ! The panel above the main entrance (now moved to William Gray House,Raby Road side.. see below image) showed female figures representing art,science and literature and was designed by Alfred Rushton art master at the Technical College. 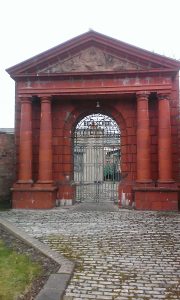 The school was built to accommodate 300 girls with space for further building expansion if needed and therefore the hall was designed to hold 400 girls. The eleven classrooms were all entered from the hall, six on the ground floor and five on the balcony floor. The school also had a laboratory fitted for chemistry and physical science, an art room, a lecture room and a cookery room with a scullery. The school cost £10,500 to build and furnish, and the land £2,226.  The 105 girls from the Technical College transferred to the new school and within weeks numbers had risen to 184.

In 1912, fees were £6 per year for residents of West Hartlepool covering tuition, books and stationery, and  £7 and 10 shillings for those living outside the borough. There were  a limited number of scholarships available.

Who attended The High School in the early days ?

In 1923, to attend the school, girls had to be between 10 and 12 years old and had to satisfy various criterion. They had to be at the school standard for their age, they had to pass a qualifying entrance exam in the May prior to entrance and they had to ensure that they would complete a full 4 years in the school. Free places were available to those with the highest marks who had parents with an income of less than £275 per annum. Other girls’ parents had to pay a fee of £3 per term before the commencement of the term. Children outside the borough could only be admitted if there were places available. This system, with increases in fees over the years, carried on until the 11 plus was introduced in 1944. A large number of parents did infact pay for their girls to have a High School education and this, for many, was a massive committment.

In Council minutes of October 1925, there was a suggestion that land be purchased in Eldon Grove for a playing field and gym. One councillor stated that we pay for children to work and not play and another suggested that those present should look at the overcrowded schools in the town centre which were in a far worse state. The motion was not passed.